discs in the complex plane whose union contains the eigenvalues of the matrix. The theorem can provide approximations to eigenvalues. It can also provide qualitative information, such as that all the eigenvalues lie in a particular half-plane.

lie in the union of the

discs in the complex plane

be an eigenvalue of

a corresponding eigenvector and let

are defined in terms of a summation over the rows of

, but since the eigenvalues of

are the same as those of

the same result holds with summation over the columns.

A consequence of the theorem is that if

does not belong to any of the Gershgorin discs then

Another consequence of the theorem is that if

is positive definite. This condition is equivalent to

having positive diagonal elements and being strictly diagonally dominant.

The Gershgorin discs for the

The eigenvalues—three real and one complex conjugate pair—are the black dots. It happens that each disc contains an eigenvalue, but this is not always the case. For the matrix

and the blue disc does not contain an eigenvalue. The next result, which is proved by a continuity argument, provides additional information that increases the utility of Gershgorin’s theorem. In particular it says that if a disc is disjoint from the other discs then it contains an eigenvalue.

of the Gershgorin discs of

are disjoint from the other discs then their union contains

Theorem 2 tells us that the rightmost disc in our

, since it is disjoint from the other discs, and the union of the other four discs contains four eigenvalues. Furthermore,

must be real, because if not it occurs in a complex conjugate pair since the matrix is real, and as the disc is symmetric about the real axis

would also lie in the disc, contradicting Theorem 2.

Gershgorin’s theorem is most useful for matrices that are close to being diagonal. A technique that can produce improved eigenvalue estimates is to apply the theorem to

for some nonsingular diagonal matrix

. This similarity transformation does not change the eigenvalues but it does change the discs, and the aim is to choose

to reduce the radiuses of the discs. Consider our

example. We know that there is one eigenvalue

in the rightmost disc and that it is real, so

Most books on matrix analysis or numerical linear algebra include Gershgorin’s theorem.

Eigenvalue inclusion regions have been developed with discs replaced by more complicated shapes, such as Brauer’s ovals of Cassini.

Varga’s 2004 book is devoted to Gershgorin’s theorem and related results. It reproduces Gershgorin’s 1931 paper in an appendix.

for some positive integer

. A nonzero nilpotent matrix must have both positive and negative entries in order for cancellation to take place in the matrix powers. The smallest

is called the index of nilpotency. The index does not exceed

Here are some examples of nilpotent matrices. 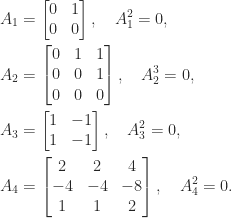 instance of the upper bidiagonal

. The superdiagonal of ones moves up to the right with each increase in the index of the power until it disappears off the top right corner of the matrix.

and was constructed using a general formula: if

is nilpotent then every eigenvalue is zero, since

. Consequently, the trace and determinant of a nilpotent matrix are both zero.

is nilpotent and Hermitian or symmetric, or more generally normal (

, since such a matrix has a spectral decomposition

is zero. It is only for nonnormal matrices that nilpotency is a nontrivial property, and the best way to understand it is with the Jordan canonical form (JCF). The JCF of a matrix with only zero eigenvalues has the form

. It follows that the index of nilpotency is

What is the rank of an

? The minimum possible rank is

, attained for the zero matrix. The maximum possible rank is

, attained when the JCF of

has just one Jordan block of size

is attained when there is a Jordan block of size

and all other blocks are

Finally, while a nilpotent matrix is obviously not invertible, like every matrix it has a Moore–Penrose pseudoinverse. The pseudoinverse of a Jordan block with eigenvalue zero is just the transpose of the block:

An eigenvalue of a square matrix

for some nonzero vector

is an eigenvector of

eigenvalues. This can be seen by noting that

is a scalar polynomial of degree

(the characteristic polynomial of

) with nonzero leading coefficient and so has

roots, which are the eigenvalues of

are the same as those of

A real matrix may have complex eigenvalues, but they appear in complex conjugate pairs. Indeed

is an eigenvalue of

matrices and their eigenvalues.

are upper triangular, that is,

. For such a matrix the eigenvalues are the diagonal elements.

) has real eigenvalues. A proof is

so premultiplying the first equation by

and postmultiplying the second by

) has pure imaginary eigenvalues. A proof is similar to the Hermitian case:

is equal to both

In general, the eigenvalues of a matrix

can lie anywhere in the complex plane, subject to restrictions based on matrix structure such as symmetry or skew-symmetry, but they are restricted to the disc centered at the origin with radius

, because for any matrix norm

it can be shown that every eigenvalue satisfies

Here are some example eigenvalue distributions, computed in MATLAB. (The eigenvalues are computed at high precision using the Advanpix Multiprecision Computing Toolbox in order to ensure that rounding errors do not affect the plots.) The second and third matrices are real, so the eigenvalues are symmetrically distributed about the real axis. (The first matrix is complex.)

Although this article is about eigenvalues we need to say a little more about eigenvectors. An

with distinct eigenvalues has

for some nonsingular matrix

the matrix of eigenvalues. If we write

above both have two linearly independent eigenvectors.

If there are repeated eigenvalues there can be less than

above has only one eigenvector: the vector

(or any nonzero scalar multiple of it). This matrix is a Jordan block. The matrix

shows that a matrix with repeated eigenvalues can have linearly independent eigenvectors.

Here are some questions about eigenvalues.

Finally, we note that the concept of eigenvalue is more general than just for matrices: it extends to nonlinear operators on finite or infinite dimensional spaces.

Many books include treatments of eigenvalues of matrices. We give just three examples.