The second difference matrix is the tridiagonal matrix

and sub- and superdiagonal elements

. (Accordingly, the second difference matrix is sometimes defined as

can be generated by gallery('tridiag',n), which is returned as a aparse matrix.

This is Gil Strang’s favorite matrix. The photo, from his home page, shows a birthday cake representation of the matrix.

The second difference matrix is symmetric positive definite. The easiest way to see this is to define the full rank rectangular matrix

. The factorization corresponds to representing a central difference as the product of a forward difference and a backward difference. Other properties of the second difference matrix are that it is diagonally dominant, a Toeplitz matrix, and an

In an LU factorization

. Hence the pivots form a decreasing sequence tending to 1 as

Since the determinant is the product of the pivots,

(as follows from the formula (1) below for the eigenvalues).

is therefore an eigenvector matrix for

Various modifications of the second difference matrix arise and similar results can be derived. For example, consider the matrix obtained by changing the

It can be shown that

If we perturb the

, we obtain a singular matrix, but suppose we perturb the

is a matrix of Givens, and the eigenvalues are

was introduced by Frank in 1958 as a test matrix for eigensolvers.

Taking the Laplace expansion about the first column, we obtain

In MATLAB, the computed determinant of the matrix and its transpose can be far from the exact values of

This behavior illustrates the sensitivity of the determinant rather than numerical instability in the evaluation and it is very dependent on the arithmetic (different results may be obtained in different releases of MATLAB). The sensitivity can be seen by noting that

which means that changing the

changes the determinant by

It is easily verified that

is lower Hessenberg with integer entries. This factorization provides another way to see that

for any subordinate matrix norm, showing that the condition number grows very rapidly with

. In fact, this lower bound is within a factor

of the condition number for the

the characteristic polynomial of

. By expanding about the first column one can show that

Using (3), one can show by induction that

This means that the eigenvalues of

occur in reciprocal pairs, and hence that

is an eigenvalue when

is odd. It also follows that

is even and anti-palindromic when

is nonderogatory, that is, no eigenvalue appears in more than one Jordan block in the Jordan canonical form. It can be shown that the eigenvalues are real and positive and that they can be expressed in terms of the zeros of Hermite polynomials. Furthermore, the eigenvalues are distinct.

If each eigenvalue of an

times as large. From (1) we see that a change to

, and it follows that some eigenvalues must undergo a large relative perturbation. The condition number of a simple eigenvalue is defined as the reciprocal of the cosine of the angle between its left and right eigenvectors. For the Frank matrix it is the small eigenvalues that are ill conditioned, as shown here for

“gives our selected procedures difficulties” and that “accuracy was lost in the smaller roots”. The difficulties encountered by Frank’s codes were shown by Wilkinson to be caused by the inherent sensitivity of the eigenvalues to perturbations in the matrix.

The logarithmic norm of a matrix

(also called the logarithmic derivative) is defined by

where the norm is assumed to satisfy

Note that the limit is taken from above. If we take the limit from below then we obtain a generally different quantity: writing

The logarithmic norm is not a matrix norm; indeed it can be negative:

The logarithmic norm can also be expressed in terms of the matrix exponential.

We give some basic properties of the logarithmic norm.

It is easy to see that

The next result shows the crucial property that

features in an easily evaluated bound for the norm of

is the smallest constant that can appear in this bound.

and a consistent matrix norm,

, by Lemma 1 there exists

). Then for any integer

is arbitrary, it follows that

The logarithmic norm was introduced by Dahlquist (1958) and Lozinskii (1958) in order to obtain error bounds for numerical methods for solving differential equations. The bound (2) can alternatively be proved by using differential inequalities (see Söderlind (2006)). Not only is (2) sharper than

The spectral abscissa is defined by

denotes the spectrum of

(the set of eigenvalues). Whereas the norm bounds the spectral radius (

), the logarithmic norm bounds the spectral abscissa, as shown by the next result.

and a consistent matrix norm,

In view of Lemma 1, the logarithmic norm

can be expressed as the one-sided derivative of

determines the initial rate of change of

(as well as providing the bound

). The long-term behavior is determined by the spectral abscissa

if and only if

, which can be proved using the Jordan canonical form.

The next result provides a bound on the norm of the inverse of a matrix in terms of the logarithmic norm.

Theorem 5. For a nonsingular matrix

and a subordinate matrix norm, if

denotes the largest eigenvalue of a Hermitian matrix. 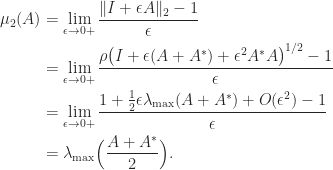 is normal, so that

We can make some observations about

For a numerical example, consider the

tridiagonal matrix anymatrix('gallery/lesp'), which has the form illustrated for

, and it is easy to see that

gives a faster decaying bound than

based on the vector norm

is a Hermitian positive definite matrix. The corresponding logarithmic norm

can be expressed as the largest eigenvalue of a Hermitian definite generalized eigenvalue problem.

be symmetric positive definite and consider the inner product

and the corresponding norm defined by

. It can be shown that for

satisfies a one-sided Lipschitz condition if there is a function

in some region and all

. For the linear differential equation with

and so the logarithmic norm

can be taken as a one-sided Lipschitz constant. This observation leads to results on contractivity of ODEs; see Lambert (1991) for details.

For more on the use of the logarithmic norm in differential equations see Coppel (1965) and Söderlind (2006).

The proof of Theorem 3 is from Hinrichsen and Pritchard (2005).

A tridiagonal matrix is a square matrix whose elements are zero away from the main diagonal, the subdiagonal, and the superdiagonal. In other words, it is a banded matrix with upper and lower bandwidths both equal to

. It has the form

An important example is the matrix

that arises in discretizating the Poisson partial differential equation by a standard five-point operator, illustrated for

It is symmetric positive definite, diagonally dominant, a Toeplitz matrix, and an

Tridiagonal matrices have many special properties and various algorithms exist that exploit their structure.

It can be useful to symmetrize a matrix by transforming it with a diagonal matrix. The next result shows when symmetrization is possible by similarity.

then there exists a diagonal

with positive diagonal elements such that

elements in the matrix

and solve (2) to obtain real, positive

. The formula for the off-diagonal elements of the symmetrized matrix follows from (1) and (2).

The LU factors of a tridiagonal matrix are bidiagonal:

, is singular. In general, partial pivoting must be used to ensure existence and numerical stability, giving a factorization

has at most two nonzeros per column and

has an extra superdiagonal. The growth factor

is easily seen to be bounded by

For a tridiagonal Toeplitz matrix

the elements of the LU factors converge as

has an LU factorization with LU factors (3) and that

From (4), it follows that under the conditions of Theorem 2,

. Note that the conditions of Theorem 2 are satisfied if

is diagonally dominant by rows, since

. Note also that if we symmetrize

using Theorem 1 then we obtain the matrix

, which is irreducibly diagonally dominant and hence positive definite if

The inverse of a tridiagonal matrix is full, in general. For example,

tridiagonal matrix depends on only

parameters, the same must be true of its inverse, meaning that there must be relations between the elements of the inverse. Indeed, in

submatrix whose elements lie in the upper triangle is singular, and the

submatrix is also singular. The next result explains this special structure. We note that a tridiagonal matrix is irreducible if

are nonzero for all

is tridiagonal, nonsingular, and irreducible then there are vectors

, all of whose elements are nonzero, such that

). This explains the singular submatrices that we see in the example above.

If a tridiagonal matrix

then it has the block form

The inverse of the Toeplitz tridiagonal matrix

The eigenvalues of the Toeplitz tridiagonal matrix

elements are modified (Gregory and Karney, 1969).

Some special results hold for the eigenvalues of general tridiagonal matrices. A matrix is derogatory if an eigenvalue appears in more than one Jordan block in the Jordan canonical form, and nonderogatory otherwise.

is an irreducible tridiagonal matrix then it is nonderogatory.

and hence it is nonsingular. Therefore

has rank at least

were derogatory then the rank of

would be at most

is an eigenvalue, so

then the eigenvalues of

are real and simple.

Proof. By Theorem 1 the eigenvalues of

are those of the symmetric matrix

and so are real. The matrix

is tridiagonal and irreducible so it is nonderogatory by Theorem 4, which means that its eigenvalues are simple because it is symmetric.

The formula (6) confirms the conclusion of Corollary 5 for tridiagonal Toeplitz matrices.

Here are the two largest eigenvalues of

, as computed by MATLAB.

These eigenvalues (which are correct to the digits shown) agree almost to the machine precision.

Theorem 2 is obtained for symmetric matrices by Malcolm and Palmer (1974), who suggest saving work in computing the LU factorization by setting

is close enough to the limit.

A sample reference for Theorem 3 is Ikebe (1979), which is one of many papers on inverses of banded matrices.