What is Numerical Stability?

Numerical stability concerns how errors introduced during the execution of an algorithm affect the result. It is a property of an algorithm rather than the problem being solved. I will assume that the errors under consideration are rounding errors, but in principle the errors can be from any source.

as the input data and

as the output. The forward error of a computed approximation

is the relative error

. The backward error of

for a modest constant

is the unit roundoff.

undergoes a relative perturbation of size

can change by as much as

is the condition number of

. An algorithm that always produces

with a forward error of order

small in the sense described above, then the algorithm for computing

is mixed backward–forward stable. Such an algorithm produces almost the right answer for a slightly perturbed input. The following diagram illustrates the previous equation. 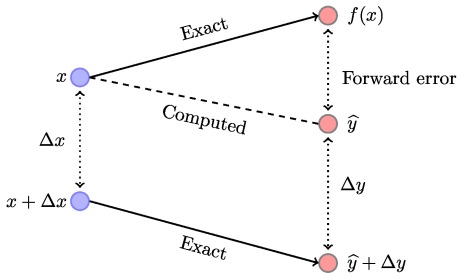 With these definitions in hand, we can turn to the meaning of the term numerically stable. Depending on the context, numerical stability can mean that an algorithm is (a) backward stable, (b) forward stable, or (c) mixed backward–forward stable.

For some problems, backward stability is difficult or impossible to achieve, so numerical stability has meaning (b) or (c). For example, let

matrix. But the computed

independent rounding errors and is very unlikely to have rank

We briefly mention some other relevant points.

This entry was posted in what-is. Bookmark the permalink.