Sixteen members of the Numerical Linear Algebra group at the University of Manchester recently attended a two-day creativity workshop in order to generate ideas for our research and other activities. The workshop was facilitated by Dennis Sherwood, who is an expert in creativity and has run many such workshops. Dennis and I have previously collaborated on workshops for the Manchester Numerical Analysis group (2013), the EPSRC NA-HPC Network (2014), and the SIAM leadership (2018).

A creativity workshop brings together a group of people to tackle questions using a structured approach, in which people share what they know about the question, ask “how might this be different” about the aspects identified, and then discuss the resulting possibilities. A key feature of these workshops is that every idea is captured—on flip charts, coloured cards, and post-it notes—and ideas are not evaluated until they have all been generated. This approach contrasts will the all-too-common situation where excellent ideas generated in a discussion are instantly dismissed because of a “that will never work” reaction.

At our workshop a number of topics were addressed, covering strategic plans for the group and plans for future research projects and grant proposals, including “Mixed precision algorithms”, “Being a magnet for talent”, and “Conferences”. Many ideas were generated and assessed and the group is now planning the next steps with the help of the detailed 70-page written report produced by Dennis.

One idea has already been implemented: we have a new logo; see A New Logo for the Numerical Linear Algebra Group.

For more on the creativity process mentioned here, as well as details of creativity workshops, including sample briefs that can be used at them, see the new book by Dennis and me: How to Be Creative: A Practical Guide for the Mathematical Sciences (SIAM, 2022). 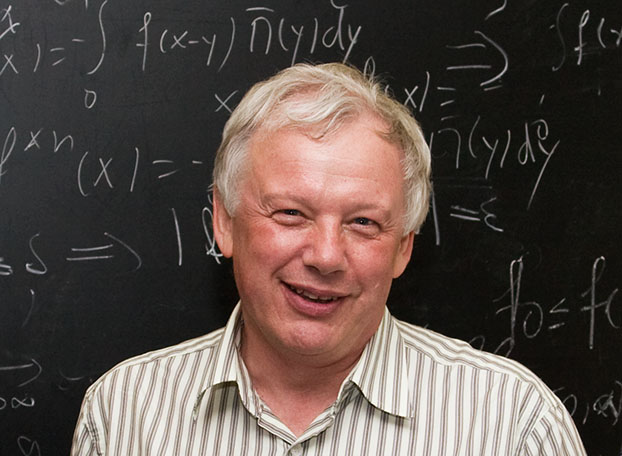 David was a truly interdisciplinary mathematician and led the CICADA (Centre for Interdisciplinary Computational and Dynamical Analysis) project (2007-2011), a £3M centre funded by the University of Manchester and EPSRC, which explored new mathematical and computational methods for analyzing hybrid systems and asynchronous systems and developed adaptive control methods for these systems. The centre involved academics from the Schools of Mathematics, Computer Science, and Electrical and Electronic Engineering, along with four PhD students and six postdocs, all brought together by David’s inspirational leadership.

One of the legacies of CICADA is the burgeoning activity in Tropical Mathematics, which straddles the pure and applied mathematics groups in Manchester, and whose weekly seminars David managed to attend regularly until shortly before his death. Indeed one of David’s last papers is his Algebraic approach to time borrowing (2013), with Steve Furber and Marianne Johnson, which uses max-plus algebra to study an algorithmic approach to time borrowing in digital hardware.

Among the other things that David pioneered in the School, two stand out for me. First, he ran one of the EPSRC creativity workshop pilots in 2010 under the Creativity@Home banner, for the CICADA project team. The report from that workshop contains a limerick, which I remember David composing and reading out on the first morning:

One who works on Project CICADA

Has to be a conceptual trader

Who needs the theory of Morse

To tap into the Force –

The workshop was influential in guiding the subsequent activities of CICADA and its success encouraged me to organize two further creativity workshops, for the numerical analysis group and for the EPSRC NA-HPC Network.

The second idea that David introduced to the School was the role of a technology translator. He had organized (with David Abrahams) a European Study Group with Industry in Manchester in 2005 and saw first-hand the important role played by technology translators in providing two-way communication between mathematicians and industry. David secured funding from the University’s EPSRC Knowledge Transfer Account and combined this with CICADA funds to create a technology translator post in the School of Mathematics. That role was very successful and the holder (Dr Geoff Evatt) is now a permanent lecturer in the School.

I’ve touched on just a few of David’s many contributions. I am sure other tributes to David will appear, and I will try to keep a record at the end of this post.

The EPSRC Network Numerical Algorithms and High Performance Computing, coordinated by David Silvester and me, came to the end of its three-year term in May 2014. One of our final activities was a two-day Creativity Workshop, held at Chicheley Hall just before Easter.

The workshop was advertised to network members and we were able to accept all applicants. The 23 attendees comprised PhD students, postdoctoral researchers, faculty, and HPC support experts from Cambridge University, the University of Edinburgh, Imperial College, The University of Manchester, MIT, NAG Ltd., Queens University Belfast, STFC-RAL, UCL, and the University of Tennessee at Knoxville, along with an EPSRC representative.

The workshop was facilitated by creativity expert Dennis Sherwood. I explained the idea of these workshops in an earlier post about a creativity workshop we held for the Manchester Numerical Analysis Group last year. The procedure is for the attendees to work in groups tackling important questions using a structured approach that encourages innovative ideas to be generated and carefully assessed and developed. The key ingredients are

The workshop was targeted at researchers working at the interface between numerical analysis and high performance computing. The aims were to share ideas and experiences, make progress on research problems, and identify topics for research proposals and new collaborations.

The topics addressed by the groups were sensitivity in sparse matrix computations; programming languages; deployability, maintainability and reliability of software; fault-resilient numerical algorithms; and “16th April 2019”.

The notes for the last topic began “It’s 16th April 2019, and we’re celebrating the success of our network. What is it, precisely, that is so successful? And what was it about the decisions we took five years ago, in 2014, that, with hindsight, were so important?”. The discussion led to a number of ideas for taking the activities of the network forward over the coming years. These include

As an ice-breaker and a way of the participants getting to know each other everyone was asked to prepare a flip chart containing a summary of their key attributes, why they were attending, and something they have done that they feel particularly good about. These were presented throughout the two days.

Dennis Sherwood has produced a 166-page report that distills and organizes the ideas generated during the workshop. Attendees will find this very useful as a reminder of the event and of the various actions that resulted from it.

Chicheley Hall, is a historic country house located near Milton Keynes. It was purchased a few years go by the Royal Society, who turned it into a hotel and conference center, and it houses the Kavli Royal Society International Centre. It’s a terrific place to hold a small workshop. The main house and its meeting rooms have a wonderful ambience, the 80-acre grounds (complete with lake and dinosaur sculpture) are a delight to walk around, and each of the 48 bedrooms is named after a famous scientist.

The Numerical Analysis Group at the University of Manchester held a two-day Creativity Workshop at Shrigley Hall in the Cheshire countryside at the end of May 2013. All of the numerical analysis staff, postdocs and PhD students attended, along with two external collaborators from NAG and the Rutherford Appleton Laboratory.

A creativity workshop is an event in which a group of people tackle questions using a structured approach that encourages innovative ideas to be generated and carefully assessed and developed. It avoids the trap that we readily fall into of evaluating ideas too soon. Such an event needs an experienced facilitator who understands the nature of creativity and can skillfully guide the participants through the steps of tackling problems.

We were fortunate to have as our guide Dennis Sherwood, a leading expert on creativity who has worked with a wide variety of organizations including Manchester United, the National Grid and the European Commission, and who is recommended by EPSRC (indeed Dennis previously led an EPSRC-funded creativity workshop in 2010 that I attended as part of the Manchester CICADA team).

Dennis provides participants with a day of creativity training before a workshop. He quotes Koestler’s law (from The Act of Creation, 1964):

The creative act is not an act of creation in the sense of the Old Testament.
It does not create something out of nothing.
It uncovers, selects, reshuffles, combines, synthesizes, already
existing facts, ideas, faculties, skills.
The more familiar the parts the more striking the new whole.

He points out a problem with Koestler’s definition: it assumes that the sub-assemblies that are selected, reshuffled, and so on, are already explicitly there. In practice they are usually there within existing patterns, and may not be so obvious. He formulates Sherwood’s Law:

Creativity is the process of forming new patterns from pre-existing
component parts. The more the resulting pattern shows emergent
properties, such as those of beauty, utility, or value,
the more powerful the corresponding idea.

So creativity does not necessarily need new ideas (in any case, we usually don’t know if an idea is novel), but is about taking existing ideas and combining them in new and unanticipated ways. Dennis’s training days and his books 1, 2 explain the principles of creativity and the workshops themselves help put them into practice.

At our workshop a number of questions were addressed, including “Being a magnet for talent”, “The undergraduate curriculum”, “Software and programming languages”, “The PhD experience”, as well as strategic plans for the group and plans for future research projects and grant proposals.

By the end of an exhausting workshop many ideas had been generated and assessed and the group is now planning the next steps with the help of the detailed 94-page written report produced by Dennis.

Despite some understandable initial skepticism among some attendees new to the creativity workshop concept, everyone participated fully and enjoyed the experience. I thoroughly recommend such a workshop to other research groups.