An LU factorization of an

is unit lower triangular and

is upper triangular. “Unit” means that

has ones on the diagonal. Example:

An LU factorization simplifies the solution of many problems associated with linear systems. In particular, solving a linear system

reduces to solving the triangular systems

, an LU factorization may or may not exist, and if it does exist it may not be unique. Conditions for existence and uniqueness are given in the following result (see Higham, 2002, Thm. 9.1 for a proof). Denote by

the leading principal submatrix of

has a unique LU factorization if and only if

is singular for some

then the factorization may exist, but if so it is not unique.

Note that the (non)singularity of

plays no role in Theorem 1. However, if

are necessarily nonsingular and so

. The left side of this equation is unit lower triangular and the right side is upper triangular; therefore both sides must equal the identity matrix, which means that

. In fact, such determinantal formulas hold for all the elements of

are vectors of subscripts, denotes the submatrix formed from the intersection of the rows indexed by

and the columns indexed by

are the multipliers. Of course each

must be nonzero for these formulas to be defined, and this is connected with the conditions of Theorem 1, since

is the upper triangular LU factor, with

, that is, the multipliers make up the

factor (for a proof of these properties see any textbook on numerical linear algebra).

The matrix factorization viewpoint is well established as a powerful paradigm for thinking and computing. Separating the computation of LU factorization from its application is beneficial. For example, given

we saw above how to solve

. If we need to solve for another right-hand side

we can just solve

reduces to solving the triangular systems

has unit diagonal the first row of

is the same as the first row of

then determines the first column of

. One can go on to determine the

. This leads to the Doolittle method, which involves inner products of partial rows of

and partial columns of 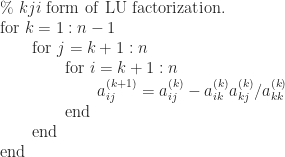 ordering of the loops in the factorization is the basis of early Fortran implementations of LU factorization, such as that in LINPACK. The inner loop travels down the columns of

since Fortran stores arrays by column. Interchanging the two inner loops gives the

ordering, which updates the matrix a row at a time, and is appropriate for a language such as C that stores arrays by row.

orderings correspond to the Doolittle method. The last two of the

orderings, to which we will return later.

is called the Schur complement of

The first row and column of

is an LU factorization of

. Note that this is simply another way to express the

For several matrix structures it is immediate that

. If we can show that the Schur complement inherits the same structure then it follows by induction that we can compute the factorization for

, and so an LU factorization of

exists. Classes of matrix for which

being in the class implies the Schur complement

is also in the class include

(The proofs of these properties are nontrivial.) Note that the matrix (1) is row diagonally dominant, as is its

factor, as must be the case since its rows are contained in Schur complements.

inherit the bandwidths of

has an LU factorization then

and the first row of

have the required structure and

In order to achieve high performance on modern computers with their hierarchical memories, LU factorization is implemented in a block form expressed in terms of matrix multiplication and the solution of multiple right-hand side triangular systems. We describe two block forms of LU factorization. First, consider a block form of (2) with block size

is the Schur complement of

. This leads to the following algorithm:

The factorization on step 1 can be done by any form of LU factorization. This algorithm is known as a right-looking algorithm, since it accesses data to the right of the block being worked on (in particular, at each stage lines 2 and 4 access the last few columns of the matrix).

An alternative algorithm can derived by considering a block

partitioning, in which we assume we have already computed the first block column of

We now compute the middle block column of

This algorithm corresponds to the

ordering. Note that the Schur complement is updated only a block column at a time. Because the algorithm accesses data only to the left of the block column being worked on, it is known as a left-looking algorithm.

Our description of these block algorithms emphasizes the mathematical ideas. The implementation details, especially for the left-looking algorithm, are not trivial. The optimal choice of block size

will depend on the machine, but

is typically in the range

An important point is that all these different forms of LU factorization, no matter which

ordering or which value of

Although it is most commonly used for square matrices, LU factorization is defined for rectangular matrices, too. If

then the factorization has the form

upper trapezoidal. The conditions for existence and uniqueness of an LU factorization of

are the same as those for

Another form of LU factorization relaxes the structure of

having identity matrices on the diagonal:

is not, in general, upper triangular.

An example of a block LU factorization is

because of the zero

pivot. This block LU factorization corresponds to using the leading

to eliminate the elements in the

submatrix. In the context of a linear system

, we have effectively solved for the variables

and then substituted for

in the last two equations.

is block diagonally dominant by rows or columns.

Note that to solve a linear system

using a block LU factorization we need to solve

, but the latter system is not triangular and requires the solution of systems

involving the diagonal blocks of

, which would normally be done by (standard) LU factorization.

has a unique LU factorization then for a small enough perturbation

exists. To first order, this equation is

is strictly lower triangular and

is upper triangular, we have, to first order,

the strictly upper triangular part. Clearly, the sensitivity of the LU factors depends on the inverses of

. However, in most situations, such as when we are solving a linear system

, it is the backward stability of the LU factors, not their sensitivity, that is relevant.

Since not all matrices have an LU factorization, we need the option of applying row and column interchanges to ensure that the pivots are nonzero unless the column in question is already in triangular form.

In finite precision computation it is important that computed LU factors

are numerically stable in the sense that

is a constant and

is the unit roundoff. For certain matrix properties, such as diagonal dominance by rows or columns, numerical stability is guaranteed, but in general it is necessary to incorporate row interchanges, or row or column interchanges, in order to obtain a stable factorization.

See What Is the Growth Factor for Gaussian Elimination? for details of pivoting strategies and see Randsvd Matrices with Large Growth Factors for some recent research on growth factors.