By Nick Higham and Neville Ford (University of Chester) 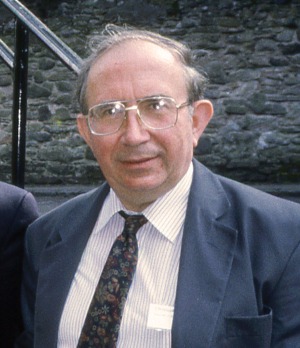 Christopher Thomas Hale Baker died on August 20, 2017 at the age of 78. He was born on the Isle of Thanet, Kent, in 1939, and was educated at Colchester Royal Grammar School and Jesus College Oxford, where he held an Edwin Jones Scholarship and a State Scholarship.

His first full-time employment was between school and college, when he worked in the Physics Research Laboratory of BX Plastics. He obtained his BA in 1961 and his M.A. and D.Phil., in 1964, from the University of Oxford. Between 1964 and 1966 he held a Fulbright Award and was Instructor and PG Research Mathematician at UC Berkeley. From 1966 Christopher was lecturer, senior lecturer and then reader at the University of Manchester, becoming professor in 1989. He had periods of leave at the University of Toronto (in 1972 and 1976) and Oxford University.

Christopher was founding Director of the Manchester Centre for Computational Mathematics (MCCM), formed in 1992 by the numerical analysis groups at the University of Manchester and UMIST to build on existing collaborations. In his ten years as Director, the centre grew substantially in activity, as seen particularly in the Numerical Analysis Report series, and the M.Sc. in Numerical Analysis and Computing. Christopher was instrumental in involving external researchers in MCCM, notably the Chester numerical analysts.

In his introduction to the 2000 annual report of MCCM, Christopher offered some thoughts on the nature of Numerical Analysis.

Those words strike us as just as valid today as when Christopher wrote them seventeen years ago.

Here is a list of his PhD students (complete as far as we know), with their last known affiliations.

Christopher had heart bypass surgery in 1988 and the surgeon told him “We know these vein grafts last for 12 years”. Thankfully, that was a severe underestimate, and Christopher maintained all his usual activities right until the end.

Christopher will be remembered as a kind, generous, and sociable colleague as well as for his leadership in applied mathematics and numerical analysis in Manchester, Chester, across the UK, and beyond.

Christopher is survived by his wife Helen, his children Deborah and Mark, and four grandchildren

Christopher was a student at Oxford when Leslie Fox was Professor of Numerical Analysis and head of the Computing Laboratory. According to David Sayers, Fox used to refer to Christopher as “that pure mathematician”—presumably because of the rigorous mathematical approach that Christopher used in his research on the numerical treatment of integral equations. When I was a PhD student I remember hearing of a seminar where the speaker showed how to solve numerically an integral equation for which there was later shown to be no solution. Christopher would never fall into such a trap! He served for three years on the adjudicating committee for the Leslie Fox prize, chairing it in 1997. He dedicated a paper (“Parallel continuous Runge-Kutta methods and vanishing lag delay differential equations”, 1993) to the memory of Leslie Fox.

Christopher was a shrewd operator at faculty level. He secured many promotions in the department at a time when they were limited by university finances. He was responsible for mathematics being chosen as the location for a large PC cluster in the early days of the use of PCs for teaching. I found a 1993 email in which Christopher wrote, to colleagues in the department, many of whom were not au fait with computing:

“You may ask why it is thought that computers can assist teaching … Computers can be used to yield visual and numerical insight, if the right packages are used. They can also access databases (library catalogues, journal and book reviews, etc.) The international trends are quite clear. It is also quite clear that computers are a genuine aid to modern mathematical research and development; some of our graduates will become real mathematicians.”

Christopher was an enthusiastic early adopter of email, originally on the university CMS system. He was professor in charge of computing for many years in the 1990s: a major task in a time of rapid change.

Christopher’s involvement with colleagues at the University of Chester stems from his collaboration with me that has lasted more than 30 years. My former pure mathematics tutor, Brian Steer (who had been a student with Christopher during his time at Jesus College) put me in touch with Christopher as somebody who could supervise me (interests in functional and classical analysis) and help me establish myself in numerical analysis. As Nick describes, Christopher was always shrewd. I recognise the way careful supervision encouraged students to play to their strengths and to answer research questions which other people would find to be interesting. He frequently reminded us all that no question is worth answering unless somebody other than the author of the paper is asking it. I also remember being challenged repeatedly by his question ‘what do you mean by …’ (stability, for example) reflecting his determination to understand the underlying mathematics before venturing an opinion on a numerical scheme.

Christopher was responsible for inviting members of the Chester mathematics team to join with the Manchester Centre for Computational Mathematics, a co-operation which worked very effectively for our emerging research group, and on his retirement from Manchester we were pleased to welcome him as a member of our team, so collaborations between Christopher and the Chester group continued to develop. Even though some new members of our group had known him only for a short time before his death, they describe how much he continued to help by challenging their thinking, suggesting interesting fresh insights and contributing to the seminar programme.

Updated October 4, 2017 to correct the list of PhD students.

This entry was posted in people. Bookmark the permalink.