My first programming languages were Fortran, learned in my mathematics degree, and Basic, which was the language built into the ROM (read only memory) of the Commodore PET. The PET—one of the early microcomputers, first produced in 1977—stored programs on cassette tapes, using its integral cassette deck. In those days you could buy programs on tape, at what today would seem very high prices, but people mostly wrote their own programs or typed them in from a magazine.

Many computer magazines existed that published (and paid for) programs written by hobbyists. Readers would happily type in a page or two of code in order to try the programs out. The two most popular categories of programs were games and utilities. I recently came across a file in which I’d kept a page from the January 1982 issue of Your Computer magazine containing one of my first published programs. The whole page is here in PDF form. 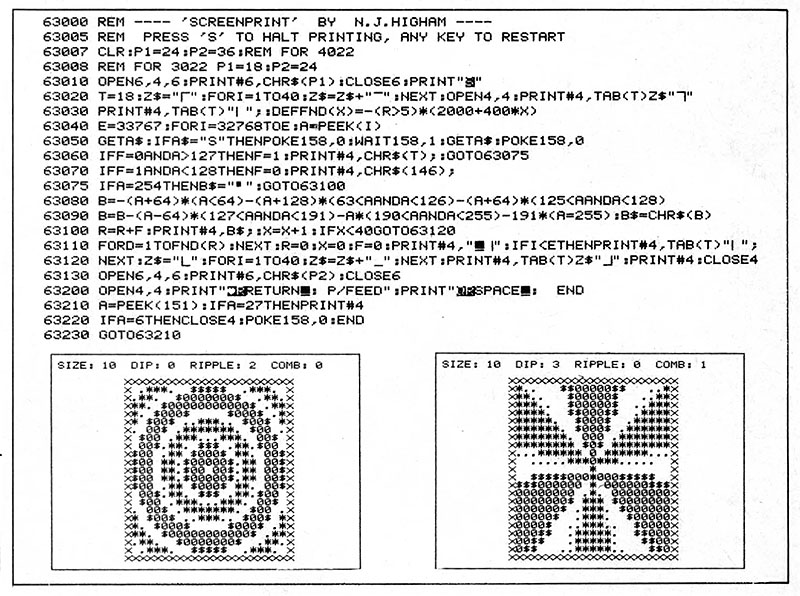 The purpose of the Screenprint program is to print the contents of the PET’s screen to an attached Commodore printer—something there was no built-in way to do. The pictures underneath the listing are screen dumps of the output from another program I wrote called Whirly Art.

Some explanation of the code is needed.

I was surprised to find that scans of many issues of Your Computer are available on the Internet Archive. Indeed that archive contains a huge range of material on all topics, including a selection of books about the Commodore PET, some of which are in my loft but which I have not looked at for years.