A book that inspired me early in my career is Numerical Methods That Work by Forman S. Acton, published in 1970 by Harper and Row. Acton, a professor in the electrical engineering department at Princeton University, had a deep understanding of numerical computation and the book captures his many years of experience of practical problem solving using a combination of hand computations and early computers. 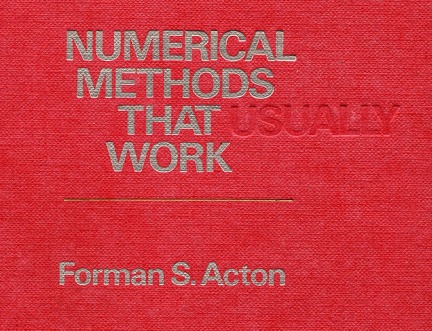 Although written in the 1960s, Acton’s book is more about the 1950s world of computation; it makes only brief mention of the QR algorithm for eigenvalues and does not cover the singular value decomposition or variable step size ODE solvers. Moreover, the author has an aversion to library routines and to rigorous error bounds. Acton states that the students who have attended his numerical methods course have mostly “been Engineers and Scientists. (Mathematicians at Princeton are proudly Pure while most Computer Scientists find an obligatory decimal point to be slightly demeaning.)”. What, then, is special about this book from an applied mathematics point of view? 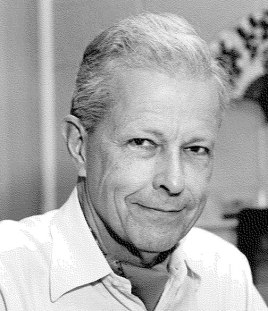 The book promotes timeless principles that are taught less and less nowadays. A general theme is to analyze a problem and exploit its structure, before applying the simplest suitable numerical method. One example that has stuck with me is the idea of trying to treat a given equation as a perturbation of an easier equation. For example, a quadratic equation

. Then simple fixed point iteration can be used to solve the quadratic with

as a (good) starting value. 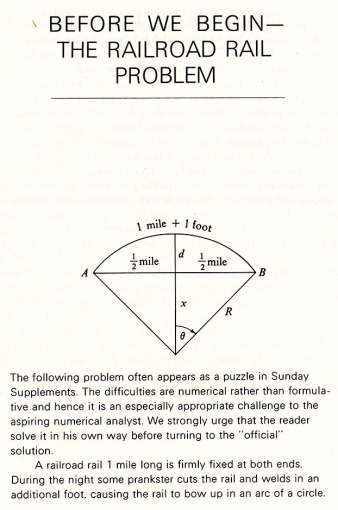 The book is particularly strong on estimation or evaluation of integrals, dealing with singularities in functions, solving scalar nonlinear equations, exploiting asymptotic series, and avoiding instabilities. Several of these issues arise in the “railroad rail problem” presented at the start of the book, which every serious user of numerical methods should have a go at solving.

The pièce de résistance of the book is undoubtedly the 13-page “Interlude: What Not to Compute”. Described as a “cathartic essay” by James Daniel in SIAM Review in 1971, this essay is as relevant as ever, though Acton’s professed dislike of recursive calculations seems dated now that most programming languages fully support recursion.

Contemporary reviewers all note the practical slant of the book. I particularly like H. F. Trotter’s comment that “this reviewer, for one, would find it easier to supply theoretical discussion to supplement this text than to supply the lively practicality that is not always present in other books on this subject” (American Scientist, 59 (4), 1971). As this comment indicates, not only is the book full of excellent advice, but it is written in a distinctive and highly entertaining style. Here are a few examples:

The typesetting is excellent. One could hardly do better in

. Moreover the diagrams are a paragon of good, minimal design and would not be easy to equal with today’s drawing packages.

In the original book the title on the cover is embossed in silver and the word “Usually” has been inserted, unembossed, just before “Work”. In the 1990 reprint by the Mathematical Association of America the “Usually” is in feint grey text. The reprint includes an extra “Preface-90”, an “Afterthoughts” (the quote in the first paragraph is taken from the latter), and some extra problems. The reprint is available on Google Books 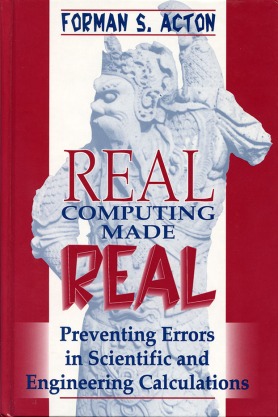 In 1996 Acton, by then an emeritus professor of computer science, published a second book Real Computing Made Real: Preventing Errors in Scientific and Engineering Calculations with Princeton University Press. It contains similar material on a smaller range of topics, and didn’t have the same impact on me as Numerical Methods that Work. Indeed, being published 26 years later it feels much more out of date. Unlike the first book, this one does mention Gaussian quadrature, but only to advise against its use. This book is now out of print at PUP but is available from Dover and at Google Books.

Acton died in 2014. Some brief biographical information can be found at a Wikipedia page, a Princeton University obituary, and a tribute from a former student.

This entry was posted in books and tagged mathematician. Bookmark the permalink.