How Fast is Quadruple Precision Arithmetic? 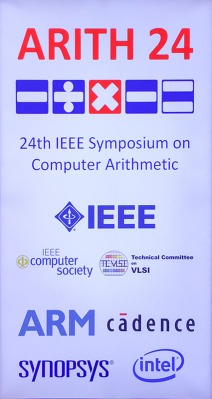 can be represented by a pair of double precision numbers

represent the leading and trailing significant digits of

, respectively. Then a product

Various aspects need to be taken into consideration when we compare double precision and quadruple precision arithmetics. First, the relative speed of the arithmetics may depend on the type of operations being performed (scalar versus vectorizable operations), memory traffic considerations, and to what extent the implementations exploit multicore processors. Second, are we to compare the same code running in different precisions or computational kernels coded specially for each precision? I will take the second approach, as it is more relevant to my usage of quadruple precision. However, this does mean that I am comparing algorithms and their implementations as well as the underlying arithmetic.

The Multiprecision Computing Toolbox supports IEEE-compliant quadruple precision arithmetic, which is invoked by using the function mp.Digits to set the precision to 34 decimal digits (in fact, this is the default). For the VPA arithmetic in the Symbolic Math Toolbox 34 decimal digit precision is specified with the command digits(34) (the default is 32 digits). According to the documentation, VPA arithmetic uses a few guard digits, that is, it computes with a few extra digits of precision. The number of guard digits cannot be set by the user. In the Multiprecision Computing Toolbox the number of guard digits can be set with the function mp.GuardDigits, and the default is to use no guard digits.

These experiments were performed on an Intel Broadwell-E Core i7-6800K CPU @ 3.40GHz, which has 6 cores. The software details are:

Further details on the Multiprecision Computing Toolbox can be seen by typing mp.Info, which lists details of open source libraries that are used.

In these experiments I do not check that the computed results are correct. Such checks are done in more extensive tests available in the test scripts at https://www.advanpix.com/2015/02/12/version-3-8-0-release-notes/. I note that the timings vary from run to run, but it is the order of magnitudes of the ratios that are of interest and these are correctly reflected by the reported results.

This code compares the speed of the arithmetics for LU factorization of a 250-by-250 matrix.

Here, MP is 75 times slower than double, and VPA is closer to the speed of MP.

Both MP and VPA come closer to double precision on this problem of computing the scalar exponential at each matrix element.

It is worth noting that the documentation for the Multiprecision Computing Toolbox states that the toolbox is optimized for quadruple precision.

It is also interesting to note that the authors of the GNU MPFR library (for multiple-precision floating-point computations with correct rounding) are working on optimizing the library for double precision and quadruple precision computations, as explained in a talk given by Paul Zimmermann at the 24th IEEE Symposium on Computer Arithmetic in July 2017; see the slides and the corresponding paper.

[Updated September 6, 2017 to clarify mp.Info and April 6, 2018 to change “Multiplication” to “Multiprecision” in penultimate paragraph.]

This entry was posted in software and tagged MATLAB. Bookmark the permalink.

2 Responses to How Fast is Quadruple Precision Arithmetic?