We last organized a workshop on matrix functions in Manchester in 2008 (MIMS New Directions Workshop Functions of Matrices). The field has advanced significantly since then. Some emerging themes of this year’s workshop were as follows.

Krylov methods: Several speakers presented new results on this class of methods for the approximation of large-scale matrix functions, including a convergence analysis by Grimm of the extended Krylov subspace method taking into account smoothness properties of the starting vector, black-box parameter selection for the rational Krylov approximation of Markov matrix functions by Guettel and Knizhnerman, and an adaptive tangential interpolation strategy for MIMO model order reduction by Simoncini and Druskin.

Matrix exponential: Research continues to focus on this, the most important of all matrix functions (the inverse is excluded as being too special). We were delighted that Charlie Van Loan opened the workshop with a talk “What Isn’t There To Learn from the Matrix Exponential?”. Charlie wrote some of the key early papers on exp(A). Indeed his work on exp(A) began when he was a postdoc at Manchester in the early 1970s, and his 1975 Manchester technical report A Study of the Matrix Exponential contains ideas that later appeared in his papers and his book (with Golub) Matrix Computations. In particular, it makes the case that “anything that the Jordan decomposition can do, the Schur decomposition can do better”, and is still worth reading.

Exotic matrix functions: Two talks focused on newer, more “exotic” matrix functions and had links to Rob Corless, who was in the audience. Bruno Iannazzo discussed how to compute the Lambert W function of a matrix, which is any solution of the matrix equation

. The scalar Lambert W function was named and popularized in a 1996 paper by Corless, Gonnet, Hare, Jeffrey and Knuth, On the Lambert W Function; it has many applications, including in delay differential equations. Bruno finished with a striking photo of the equation written in sand. 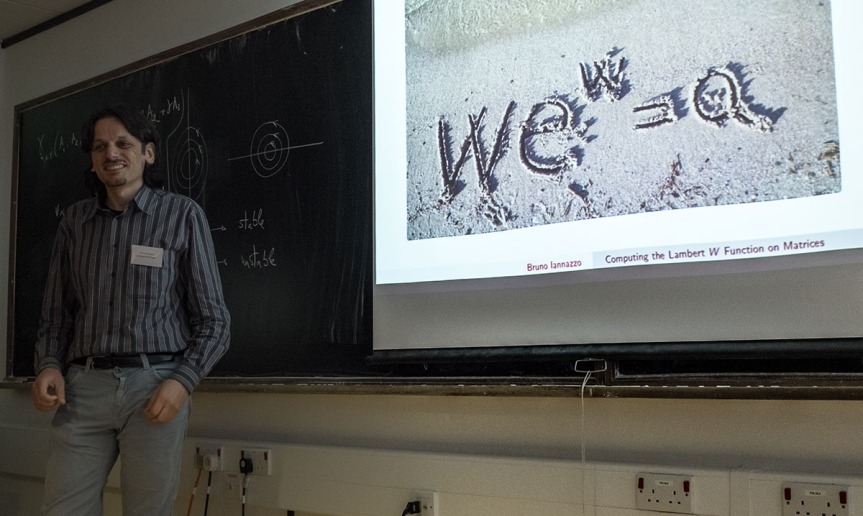 , which arises from the scalar unwinding number introduced by Corless, Hare and Jeffrey in 1996. She showed that it is useful as a means for obtaining correct identities involving multivalued functions at matrix arguments, as well as being useful for argument reduction in evaluating the matrix exponential.

A special afternoon session celebrated the 70th birthday of Krystyna Zietak, who has made many contributions to numerical linear algebra and approximation theory. Krystyna gave the opening talk in which she described some highlights of her international travels and of hosting visitors in Wroclaw, well illustrated by photos.

Following the session we had a reception in the Living Worlds gallery of the Manchester Museum, followed by a dinner in the Fossil gallery, with Stan the Tyrannosaurus Rex looking over us.

Most of the talks are available in PDF format from the workshop programme page.

A gallery of photos from the workshop has been produced, combining the efforts of several photographers.

SIAM AN21 Minisymposium on Computational Frontiers in Numerical Linear Algebra