A portrait of Sir Horace Lamb (1849-1934), FRS, Beyer Professor of Pure and Applied Mathematics from 1888 to 1920, is on display on the Atrium bridge of the Alan Turing building in the School of Mathematics at the University of Manchester. 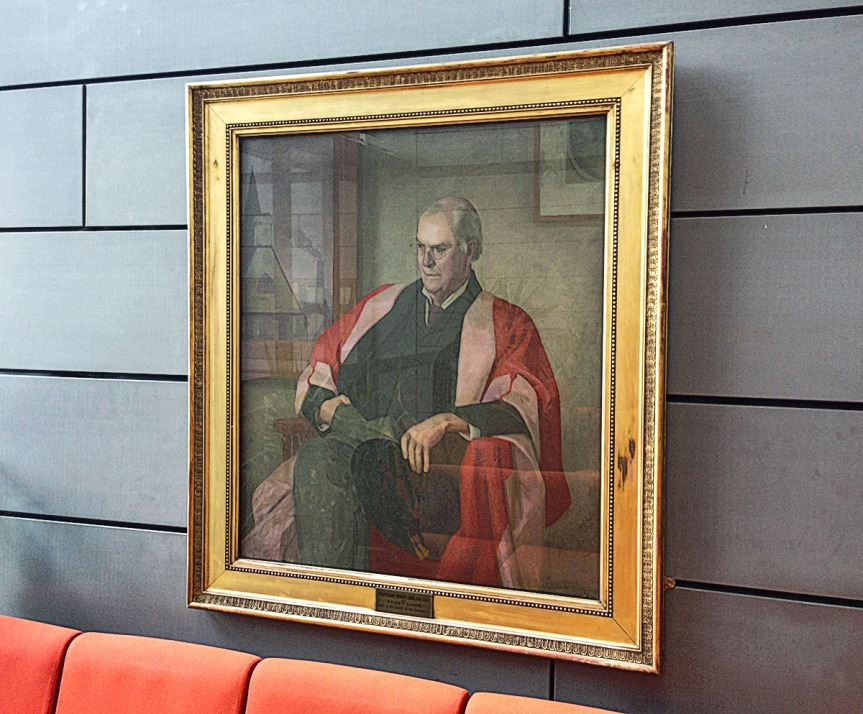 This is the School’s common room, where we meet for morning coffee and lunch and which is the focal point of the School.

The 1913 portrait, approximately, 4 feet by 4 feet, is by Lamb’s son, Henry Lamb, a distinguished painter, and was presented to the University by Ernest Rutherford. It’s difficult to photograph due to reflections on the glass, so I took the photo from an angle.

Lamb made important contributions to many topics in applied mathematics, including waves, acoustics, elasticity, fluid dynamics, with applications to areassuch as seismology and the theory of tides. He is perhaps best known for his book Hydrodynamics, first published in 1879 (under the original title “Treatise on the Mathematical Theory of the Motion of Fluids”), which went through six editions. The second edition (1895) has been digitized by Google and can be downloaded from The Internet Archive.

The School’s main meeting room is named the Horace Lamb Room and contains an ornate writing desk and display cabinets presented to Lamb by the University of Adelaide, where he worked for nine year before moving to Manchester. The cabinets contain the engravings pictured below.

The interesting story of how Lamb, born in Stockport near Manchester, came to take a chair in Adelaide, and why he subsequently returned to Manchester, is told in Horace Lamb and the Circumstances of His Appointment at Owens College by Brian Launder (2013).

For more about Lamb see The MacTutor History of Mathematics archive.